Fashion Is Contagious – Progressing Towards A Smoke-Free Delhi - Pearl Academy

Fashion Is Contagious – Progressing Towards A Smoke-Free Delhi 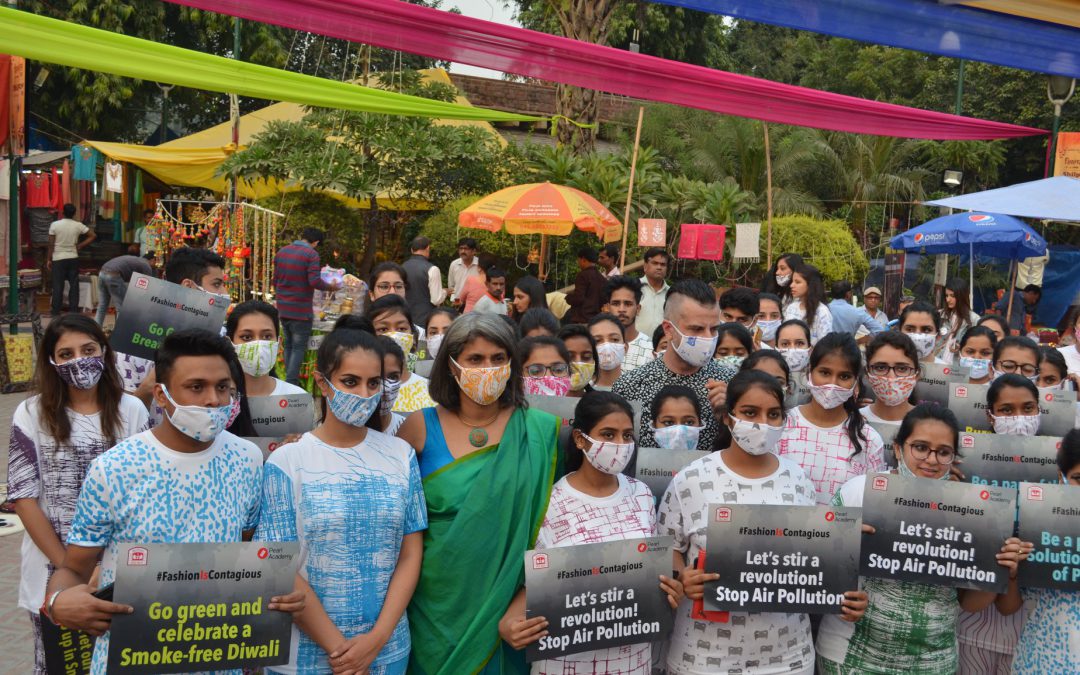 Shoppers at Dilli Haat, New Delhi, paved the way for 200 students of Pearl Academy as they marched to raise awareness on air pollution. The gathering took place on the 3rd of November 2018, four days before the festival of Diwali. . Aimed at creating awareness around air pollution produced after the celebration of Diwali in the capital, 200 students from School of Fashion from the academy participated in this drive. The marchers sported minimalistic yet eye-catching attires, influenced by latest fashion trends. To show resentment towards breathing freely in the Delhi smog, they chose to cover their faces with masks.

Emphasis on the terminology ‘Fashion Is Contagious’ was highlighted throughout the event. It might seem absurd at first to associate air pollution with fashion, however, Prof. Nandita Abraham< provided a clear perspective on the same. She said, “Fashion has the power to influence the society. It impacts and informs. Through the power of fashion, we choose to raise awareness of air pollution.” She believes the movement serves a larger purpose than just educating the masses about the degrading air quality. She added, “This will create a sense of ecological sustainability amongst the students. Especially when they step into their respective careers.”

Here’s how our students spread the message through fashion.

Slogans played a vital role at the gathering. Slogans like “Don’t let your future go up in smoke” and “Let’s stir a revolution, stop air pollution,” came across as the most impactful ones. Another striking highlight of the event was that the participants were spotted marching barefoot. “We are walking barefoot to represent equality and humbleness while raising awareness about a social cause,” said Vanshika Goyal, an undergraduate student.

The students weren’t the only members of the march, Campus Director of Pearl Academy, Noida and Delhi Campus, Mr. Alok Baraya, Dean of the School of Fashion, Antonio Maurizio Grioli and members of the faculty were also proud participants. Mr. Baraya asserted that the students were advocator’s of the ideology and believed they would incorporate eco – friendly practices in their daily lives.

Know all about the Fashion March, here.

The spectators didn’t hessitate to extend their appreciation towards the students. Daniya, a high school student from Malaysia thought that the movement was a great initiative and was spreading the right message. She suggested the movement could be made more effective by publicizing on social media and actively looking for participants from all walks. The members participated with great enthusiasm and aspired to bring change for this and the forthcoming year’s celebrations.