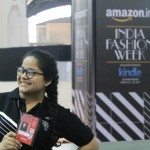 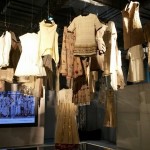 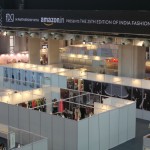 The biggest fashion event in Delhi has finally begun, and did it start with a bang? Well, definitely YES. Wills and FDCI have separated after 9 years of amazing shows and FDCI has now collaborated with Amazon to bring to you the spectacular – AMAZON INDIA FASHION WEEK. Amazon fashion week showcases works from some of the most amazing designers, from old gold’s like Rajesh Pratap Singh, JJ Valaya, Gaurav Gupta to fresh designers showing off the talents of the youth. About a 100 designers are showcasing their work at this great event and we at Pearl Academy are the proud academic partners for the event.

A lot of chanderi, polki, block printing and various other indian handicrafts were seen in the different stalls of various designers. There was a lot of creativity seen in the setting of the stores, such as Amit Aggarwal who used straws to make chandeliers while Aneet Arora’s stall had a creative use of dolls.

We must confess that Rajesh Pratap’s opening show was breathtaking. The show wasn’t really like the usual shows, he used a strategy never seen before. The theme of his show was “We are born in hospitals, we die in hospitals and then there is everything in between”. There were a number of hospital beds placed along the ramp. With his usual minimalist approach, the line had brilliant cuts, fabulous hand-woven fabric and prominent prints. The colours used went well with the theme, all on the lines of white along with shades of black. Checks, distorted polka dots and unbalanced prints were very prominent. His designs had a global appeal yet the style remained passionately Indian.

On interviewing Nasir Abdullah, Actor, he said that he absolutely loved the show and has never seen anything better. Sonalika Sahay (model), Pooman Vasudeva (designer) and Pooja Kapur (designer) seemed to agree to the show’s brilliance!

Day one definitely left us in awe, hoping for some more action in coming days. Stay tuned!

Some of the stylish people we encountered at the event are as follows, feel free to get inspired 🙂

Divya Arora had a very chic yet classy look topped with the hat!