When Orange Label Project made me question my own Feminism 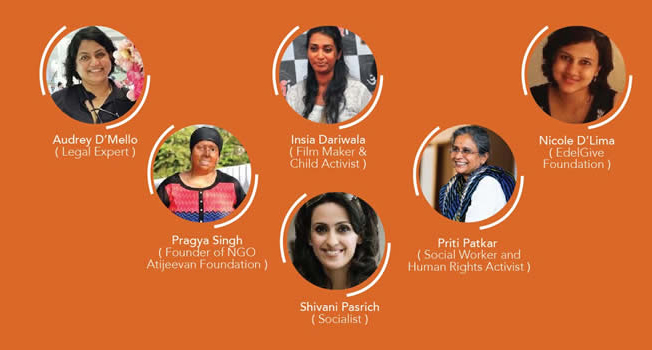 A lot has happened post panel discussion. I seem to be having a lot of conversations with myself trying to understand what is it that makes violence against women happen in the first place, how can we stop it?

Pearl Academy has extended its support to United Nations’ “Orange Label Project” by hosting a panel discussion, I was invited by school of fashion, styling and textiles to moderate the panel on “Fashion says NO to Violence against women” at Mumbai campus on 26th July 2016. I thought as a modern, progressive and educated woman I knew most about an act of violence and how to curb it. Somewhere at the back of my mind I was also in denial about the harsh realities as I believe I live in a secured environment where “something like this” will not happen to me, an illusion which most of us carry, this illusion was broken very soon for most of us when Pearl Academy alumna Pragya Prasun Singh’s (acid attack victim and founder of NGO Atijeevan) recorded interview was played for all of us to hear her story. Twelve days after her marriage on her way to campus interview, Pragya thought she had her life sorted. Her dreams came shattering down when a suitor ten years her senior whom she had said no to for marriage threw acid on her. He got ONLY FOUR YEARS of imprisonment, while Pragya is scarred for life!

Violence against women takes many forms, from domestic abuse to rape, sexual abuse and harmful cultural practices ranging from genital mutilation and honor crimes to premature marriage. It is not only the most widespread example of a human rights violation, but probably the least evident, going largely unpunished or like in Pragya’s case getting back to their normal life after minimum punishment. I wonder if increasing the duration of punishment to life time and help it become the toughest punishment will help reduce crime rate?

Audrey D’Mello, Project director at Majlis said,” every woman knows when she is subjected to violence; emotional, physical or psychological but she chooses to ignore or accept this violence for various reasons, in most cases the reasons are responsibility of children and no financial support”.

We as outsider viewing the plight of a violence victim normally sympathize with her as “poor weak woman”, weak woman? The one who musters all this courage to let violence happen to her because she has responsibility of a child? Her “kanyadaan” has been done by her parents with an advice that now you will leave your husband’s home only on “chaar kandha” (after death for last rites). The next question framed itself in my mind, “Is our social system capable of supporting women in such situations, if the system did support will there be more women saying no to these acts of violence”?

Ummul Ranalvi, a social activist whose initiative WWIN is working hard to curb violence against women, was on the panel too. She as founding member of the platform “Speak out on FGM” works especially in the area of female genital mutilation (FGM). Ummul aims at stopping this practice, still prevalent in certain communities but is surprised at the mindset of community’s complete denial of this practice as an act of violence. This revelation on her part ran a sharp shiver down my spine and popped the next question, “Is the act of violence against a woman and outcome or a process (spanning generations) by itself”?

The panel discussion which was originally scheduled to last one hour went on for next three hours with various facts about what is happening around us and why “violence against women is not only a challenge for us in India but all across the globe”. I sat there amazed at the knowledge that came pouring out, the passion filled speeches and the one mantra each of these women on the panel kept repeating, “You are the change maker”. In the audience we had our young students, girls and boys equally in awe of these five women; Audrey D’Mello-Project director-Majlis, Ummul Ranalvi, social activist and founding member-speak out on FGM, Indira Satyanarayan, social activist and a freelance journalist, Insia Dariwala; Award winning film-maker and reformist and also an activist working against FGM and Nicole D’Lima, young dynamic professional who through her current portfolio at EdelGive foundation focuses on identifying opportunities and connecting grant makers with recipient NGOs.
These powerful change makers had no inhibition about sharing their stories, realities, flaws in our societies and changes required but what stuck a deep chord was that each one believed that the change needs to start at an individual level and in homes-inside homes because that is where the first form of violence starts. Victims and culprits are a result of violence which usually starts at home. Audrey shared that 80% of the rapes are by someone in the family of the victim. My next questions, “As a society are we doing something right or something really wrong”?
Ms Indira Satyanarayan, the award winning journalist and our panelist brought to notice an astonishing hard fact; a study conducted by the UN World Health Organization (WHO) revealed that nearly 35 per cent of women across the globe have experienced either physical and/or sexual intimate partner violence or non-partner sexual violence. This instantly took my thoughts back to Nirbhaya incident which had shaken the world with horrific reality of rising sexual aggression among youth-On a December evening in 2012, a 23-year-old physiotherapy student was beaten and brutally raped by five men and a youth in an off-duty bus in the Indian capital, New Delhi. The injuries she sustained were so severe that she succumbed to them 13 days later, setting off protests in India and around the world for ending the scourge of violence against women.
The United Nations Entity for Gender Equality and the Empowerment of Women (UN Women) was among the many voices that called for immediate reform of the sexual harassment laws in India, where a study conducted by the agency and the Government showed that nearly 54 per cent of women and 69 per cent of men who see women getting harassed prefer not to get involved. (Reference: http://www.un.org/apps/news/story.asp?NewsID=52775#.V5hhKfl97rc)
My question is, “why do we not prefer to get involved, is it the fear of being out casted from the community or the fear of some harm coming to us or is it total lack of trust in law, social systems and community support”?
Insia Dariwala, director of Candy Man and Cock-Tale stated that if a victim speaks up and shares her story many others too will be motivated to speak up and this helps form a strong chain and change starts, initially through small actions which later become movements. She shared her experience of how sharing of her own story as a victim of violence made her help women to come out and talk to her about their stories. Her movement is truly inspiring and I wonder if each of us could spend some time off from our busy digital lives to talk and share our stories, maybe we can make a more dependable support system.
Nicole D’Lima from EdelGive foundation added that from her experience of working with various NGO and women help group she has realized that most of the women especially in rural environment do not have the scope of sharing their plight with anyone due to the stigma of being blamed for the violence by family, elders and community.
I close on yet another question, “How do we map the intensity of violence, is there a clarity on the definition of violence and who decides what the violence is”?