“Only legends leave a legacy behind that guides others to follow the path.”

Not everybody in this world has such magical hands that can create artistic masterpieces that are exquisite and simply breathtaking. Belongs to the ancient modernopolis of Ahmedabad, India, Errol Pires Nelson is a man with towering guru-like presence, godly white ponytails, and two extraordinarily long thumbnails (his weapon for some enthralling art).

Erroll Pires has devoted his whole life for a unique art of “Ply-split braiding”, a traditional technique utilized to make camel belts, containers of joy, belts and soft boards. He has refined, transformed, and reinvented its usage for over 30 years in what some would call an obsessive dedication, purposefully refusing the boundary between art and object. Erroll has redefined the form of art which will challenge the human minds and can resurrect the problems that one might be facing to join the centres of art and knowledge.

He joined the National Institute of Design (NID) as a student in 1970. The resource centre provided him his first introduction to the work of Fibre Artists from other countries. Erroll worked for nine years in the textiles and leather industry returning to NID in 1984 as a faculty member. His research into the techniques of ‘Ply-Split Braiding’ started around 1985, awoke a creative spirit of experimentation using this technique and has resulted in “some” pieces that might qualify as Art textiles.

The Guru himself is at Pearl Academy and will visit all the campuses from 31st August to 26th September. At Pearl Delhi, he displayed some of his artwork and interacted with the students about his life’s journey which is full of experiences and hard work on this uncommon topic. His hands, especially his thumbnails are the metaphors for creating such unique masterpieces which are acknowledged worldwide. Being a teacher for most of his life, Mr. Pires comes as an honest, humble and patient tutor who answers numerous queries of his disciples who are keen to learn this art.

Vandana, a student of PGFD (Level 1) said “Mr. Errol Pires is a true legend in this art and his work is a proof that there is no one in this world who can emulate him or his precision.”
Completely awestruck with Mr. Pires presence, she further added that “The technique is so addictive that once you start working on it, it is nearly impossible that you’ll leave the product till it is not completely finished.”
During the workshop, Errol also talked about various other aspects of Ply-Split braiding and how it is going to evolve as a technique in the years to come. He also discussed different kinds of weaving, braiding, and use of steel wire for the same technique.

According to Mr. Pires, it took almost 8 hours to make a complete container. While making a camel belt would take almost a year with 8 hours of work regularly on the product. His first experience with the famous camel belt marked a moment of epiphany for Mr. Pires. The belt is made of using sheep and goat hairs.

His repertoire extends from traditional camel belts to avant-garde three-dimensional objects and seamless dresses. You would be amazed to know that his secret weapon for this brilliant art work is actually not a secret – it’s his hands. His body of work is an amazing amalgamation of magnificent explosion of braided colors.

His vision, art, dedication towards this art is truly remarkable and enlightens our minds to think beyond the conventional forms of designing. It won’t be wrong to say that we are and will be in debt of this living legend for conserving the dying art of ‘Ply-split braiding’ and inspiring many others to carry on this legacy.

Students work on display during the workshop: 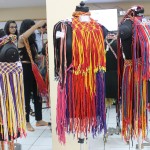 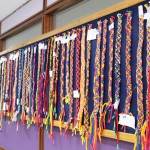 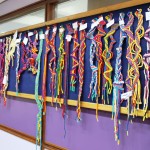 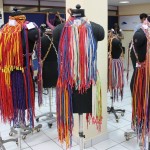 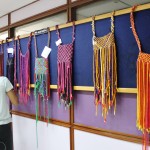