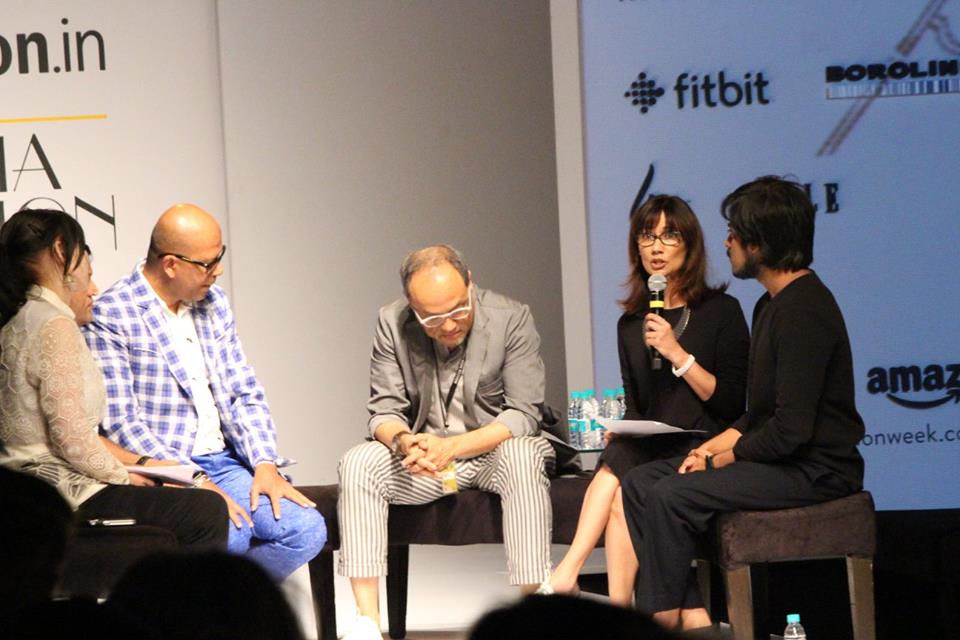 Pearl Academy shone on the third day of the Amazon India Fashion Week with their panel discussion on ‘What’s Next in Fashion: The Future of Fashion Consumption’. The panellists were eminent personalities from different walks of life yet related in some way to the fashion industry. Phyllida Jay, Narendra Kumar, David Abraham, Nonita Kalra, Manou and Ganesh Subramanian graced the occasion by their presence as panellists.

Anthropologist Phyllida Jay, who specialises in Indian fashion, luxury and sustainability, chose the topic, Maximilism vs Minimalism: Negotiating Consumer Desire, Aesthetics and Ethics. She raised some pertinent points and questions like what does this debate tell us? How can it help us navigate complex consumer markets? According to her, “Fashion is all about a cycle of actions and reactions.” She sees a lot of historical influences on Indian fashion. Speaking on Indian minimalism, she says, “It has its own unique version of minimalism. It has dynamic design tensions.”

Technology plays an important role in the industry and this was highlighted by Ganesh Subramanian, ex-COO, Myntra, who has since started his own his own venture called Stylumia Intelligence Technology. This is a data-driven technology to analyse various fashion trends in the retail and eRetail space. He said that technology will change the way fashion propositions reach consumers and how they consume. His company is developing technology that will make sense of real world images, texts and videos. Today, almost half of the clothes manufactured are sold at a discount. This is due to disconnect between demand and the forecast demand. His company is working on how to help a fashion professional take an informed decision using intelligence. “If companies determine the trend early, they will be able to increase revenue and profits,” he said.
According to Subramanian “Technology is very inclusive.” He says that the use of Artificial Intelligence for decoding fashion DNA is already in the offing. According to him, AI technology will soon solve some of the key challenges in the fashion industry. It will be possible to give a fashion and lifestyle forecast 12 months in advance. With this technology, speculation on what consumers want will soon be a thing of the past. Technology will address the three big questions of the fashion industry – what to buy, what is working real time and where and whom to sell it to. His company is developing a search engine that understands fashion. “Technology can be used to decode fashion sense of individuals,” he says.
Speaking on the occasion, NID amlumni and fashion designer David Abraham stressed on sustainability by saying that consumption is a beast and we need to control it and not allow it to take control over us. “Who we are, what we are is what we wear and buy. We need to look at the small market, villages and craftsmen.” He advocated the necessity of mindful consumption and design. He exhorted people to reinvent the wheel as opposed to keeping it going.

Democracy and anarchy of communication in fashion consumption was explained by veteran journalist Nonita Kalra. She raised the question, “Is consumption going to be the lowest common denominator?” According to her, the demigods era has ended. Today anybody with talent can succeed. She spoke on the anarchy of fashion communication and consumption and its effects

Photo blogger Manou spoke at length on consumption across classes, the digital space and role of blogs. He gave a wonderful pictorial evidence of clothing across geographically diverse places and classes. “Consumption is need based, it is culture based and very personal,” he said.

When it comes to the topic of mass consumption, brands, India Modern and rise of brands, Amazon’s Narendra Kumar is often the best person to speak on the subject. He took the audience back to 1991 when the economic liberalisation happened. He enthralled everyone by elaborating on how the country moved towards consumption. There was a seminal movement in contemporary fashion and brands came in. “This was the phase of entrepreneurship,” he said. According to him, fashion reaches a very miniscule part of the country. Today, lifestyle has changed and there is a lot of partying and clubbing. But where’s the supply? He envisions a future where people will be living in the moment and they will be able to buy what they want to wear every day at reasonable prices.

After an interactive question and answer session, the event was brought to an end by Claudio Moderini, the Head of Academics at Pearl Academy, who summed up the discussions by saying that this was is an opportunity for the audience to get a 360 degrees’ view on fashion consumption.