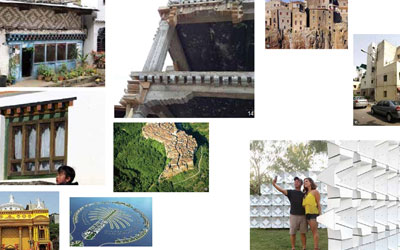 Dr. Prof. S. Badrinarayanan explores the trends in architecture, interiors, and design where the intent follows a comprehensive process, and where it is just a mere imitation. In a world of textured wallpapers and false ceilings, he advocates the need to find the ‘middle-path’ to design.

Nowadays, the word ‘Design’ is often used with the prefix ‘bespoke’ and ‘sustainable’; and has been almost reduced to a platitude. It is being attributed to anything from art, to craft, to objects, technology, habitat, services, business, to systems and governance. However, this essay will restrict itself to examining the world of mundane design; everyday things we can touch, feel, and inhabit – textiles, clothes, furniture, architecture, cities. Rather than look at design purely from the perspective of the finished product, I would like to approach it from the ‘intention’ or the ‘approach’ or ‘process’ that characterises design. The whole gamut of human design activity through history appears to be pervaded by two distinct approaches that are a very part of the human psyche- Method, and Madness. What do these mean in terms of approaches to design?

(I refer to the following dictionary meaning of Method: “A particular procedure for accomplishing or approaching something, especially a systematic or established one.” Of the three meanings associated with the word Madness, I use the third- “A state of wild or chaotic activity” for the purposes of this essay. I do not use the word in any pejorative or negative sense.)

Let us start with textile design. Fig.1 and 2 illustrate the technique of ‘Ikat’. As can be seen, the pattern is a result of a very specific type of production. I call this approach ‘Method’. Fig. 3 is screen printed Ikat. I call this approach ‘Madness’. The question is if one is screen printing fabric, why use an Ikat pattern when there are millions of other patterns to choose from?

Moving on to furniture, in the iconic chair designed by Charles Eames(Fig. 4), the seat is fibreglass moulded to fit the contours of the body. The wooden legs are spindle shaped to prevent buckling. The steel cross braces provide stability. I call this approach ‘Method’. The aesthetics might not appeal to everyone but then if we start discussing what constitutes beauty, there would be no objective basis of dialogue. The plastic moulded furniture from India(Fig. 5) imitates a heavy (and substantially more expensive) teak carved seat with cane weaving. I would call this approach ‘Madness’.

In architecture, let us start with the most basic element: the wall. In the random rubble stone masonry wall(Fig. 6), the mortar joints are water proofed and highlighted with ‘pointing’. The ‘look’ of the pointing pattern follows the stone joints and structural bonding of the construction. I call this ‘Method’. On another wall of similar construction(Fig. 7), one can see that the pointing pattern has nothing to

do with the joints, yet it attempts to imitate the pattern in Fig. 6. I call this ‘Madness’.

In the traditional rural homestead in Bengal(Fig. 8), the arched ridge beam and the curved eaves evolved from the economic use of local bamboo as the primary structural material. The roof form allowed rain water to drain quickly from the thatch roof. In the brick temple from Vishnupur, Bengal(Fig. 9), the same roof form (called the boat keel dome) is now imitated in brick. There is still some structural logic to the form as arches and domes behave as compressive structures to span the space. In the Mehrangarh fort palace in Jodhpur, Rajasthan(Fig.10), this form is translated in stone. I would call this Madness despite its beauty, because the exaggerated eaves of stone have been stretched beyond their natural structural properties. Rajasthan is an arid region and the roof forms do not have to facilitate drainage. A contemporary Indian hotel in Gurgaon, Haryana(Fig.11), recreates the same form, but in reinforced concrete.

The traditional timber and earth architecture of Ladakh, Tibet, and Bhutan(Fig. 12) evolved a unique technique of spanning lintels over the openings in the thick mud walls using a corbeling system of smaller interlocking wooden pieces(Fig. 13). Now this is seen as a ‘decorative element’ and has become the official architectural ‘identity’ of Bhutan. It is mandatory for new buildings to recreate the same corbelled forms, painstakingly moulded in concrete (Fig. 14). Our everyday life is full of such vestigial design anachronisms—from the non-functional buttons on the cuffs of our coats to the Qwerty keyboard. There is great comfort and security in convention and memory.

The residence in Fig. 15 was designed in the 1930’s in Vienna by the early modernist Adolf Loos (who famously declared “Ornamentation is crime”). The public housing designed and built by Delhi Development authority in the 1980’s (Fig. 16) appears remarkably similar – not so much because DDA shares Loos’ ideology but simply because it helps to cut costs to the minimum. Here is design reduced to its self-conscious extreme of Method, resulting in an everyday urban environment of banality and drabness. Starved of visual richness, when people want to celebrate weddings, they turn to the over-decorated banquet halls in Delhi, which are industrial sheds dressed up to resemble Baroque palaces from Europe(fig. 17).

Taking up cities, in the town of Pitigliano in Tuscany, Italy(Fig. 18), the morphology and the street pattern, like in all organic settlements, probably evolved from the natural drainage channels of the rocky plateau on which the town is built(Fig. 19). The architecture appears to extend up from, and inter-penetrate the natural rock on which it stands. I would call this ‘Method’. The aerial view of The Palm in Dubai(Fig. 20) reveals an iconic image of a city as though it dropped down from the sky. I would call this ‘Madness’.

But why bring all this up now, in 2018? I hope all this is not mistaken for the rant of a die-hard-Modernist bemoaning the lack of ‘honesty’ in design. Didn’t Post-modernism and global capitalism once and for all put an end to utopian idealism of ‘truth’ and ‘originality’? Didn’t Baudrillard declare that we are in the Post-modern epoch of simulacra and simulation where there are only representations and that the ‘original’ is not even in the picture to be discussed or valued? Aren’t we well ensconced in the era of ‘Post-Truth’, doublespeak, and fake news?

New aesthetics in physical design evolve out of diverse materials and specific ways of joining them together. Then it just becomes another ‘visual style’ to be appropriated, super- imposed pastiche-like on the most inappropriate materials, techniques, geographies, and cultural contexts. Superficial appearances then become tools for ‘identity politics’ for politicians, ad agencies, brand consultants, and glossy magazines that act as custodians and traders of ‘good taste’, creating and maintaining group and class divisions through snobbery and social exclusion. In the new age of connectivity, an ‘original’ design idea can travel around the world several times within the minute and can be diluted to its absurd level. In these interesting times, homes are beginning to look like hotels, hotels like spas, offices like cafes, banks like lounges, banquet halls like dictators’ palaces. People wearing fake torn jeans like to hang around local bistros that look the same all over the world – the same weathered fake brick walls, fake wooden counter with dim hanging LED lamps trying to fake old incandescent lamps. Has design been reduced to a momentary back-drop for the Instagram and Insta-forget? (Fig. 21).

I have tried to establish that ‘Method’ is not restricted to Modernism, and nor ‘Madness’ to Post- Modernism. Both approaches have been pervasive– across various disciplines of design, various scales of design, historical periods, geographies, and cultures. I think that both Method and Madness are reactionary takes in design evolution, and humanity has been swinging like a pendulum between the two extremes like bulimics, alternating in cycles of binging and purging. We tire of frivolity and long for logic, simplicity and sobriety. Then we tire of that and seek whimsy, ostentation and exuberance. Design lies in the overlap of the two circles. Good Design attempts to walk the razor’s edge, cutting right through the middle(Fig. 22). One hopes to see a time when we shall, as a civilisation, tire of extremes, and long for the relief of ‘normalcy’. We would want to return to basics, to re-connect with our bodies, to earth, touch real people, taste real food, breathe real air, feel real emotions, and form real communities. A time will come then perhaps for a ‘middle -path’ to design – a grounded, balanced, and sane approach to the conception, production, and consumption of design that is not driven by greed and seductive imagery, but by genuine need and grace. A prudent, responsible, sustainable approach that does not deny the richness and delight of human experience. Design that celebrates human ingenuity, integrity, and dignity—of Magic that transcends Method and Madness.