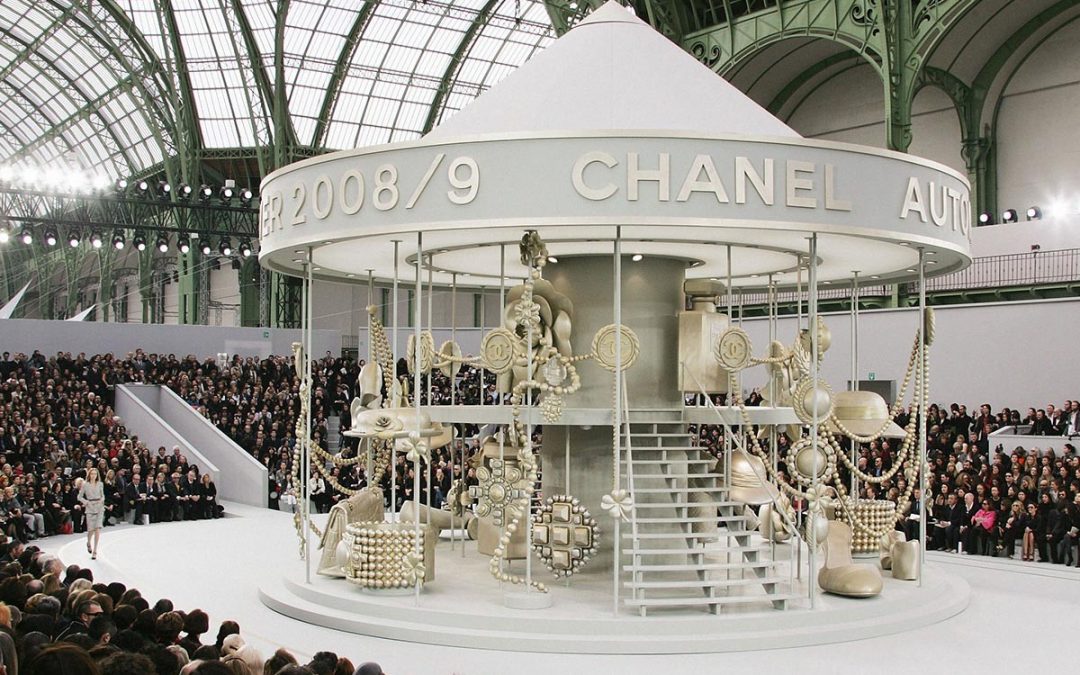 We know this much to be true: Karl Lagerfeld is a stickler for detail. His intricate Chanel designs take center stage during the house’s many fashion shows during any given year. Throughout his over-30-year reign at Chanel, Karl has taken the grand display of clothing one step further by creating a whole world in which to showcase his designs. Read on to see some of his most over-the-top presentations all over the world. There have been so many amazing themes and sets in Chanel’s spectacular shows — and here are our absolute favorites.

Fall/Winter 2008
This show was as grand as you’d expect from Chanel, with a massive carousel dominating the Grand Palais. An ornate merry-go-round was seated in the center of the set, presenting a collection of tweeds, denim, chains, and knitted jackets — all quintessential Chanel.

Fall/Winter 2010
This show was probably Karl Lagerfeld’s most over the top. For Chanel’s Fall/Winter 2010, he got a sprawling, 265-tonne real iceberg imported from Scandinavia and had it meticulously carved by 35 ice sculpture artists flown in from around the world in just six days. The venue where the show took place had to be kept at -4 C in order to keep the giant block of ice from melting.

Metiers D’Art 2011
Karl Lagerfeld infused the annual Métiers d’Art art with all the decadence, luxury and theatrics that Chanel could muster up. This show transformed the runway set into a gorgeous Indian palace and had models walk a runway bordered by banquets piled high with real fruits, flowers and candles. It managed to exude pure opulence, fusing British high tea vibes with Indian regalia for a truly breathtaking effect.

Spring/Summer 2012
For this particular show Karl Lagerfeld crafted a surreal, underwater world. The Grand Palais was transformed into a series of nautical-inspired structures and blinding white sea inspired shapes such as corals reefs, shells, seahorses, and stingrays. The stunning architecture and engineering was complemented by the collection’s clean, modern lines and new fabrics that all had an iridescent mother-of-pearl shimmer.

Couture Fall/Winter 2013
For Chanel’s Fall/Winter 2013 show, Lagerfeld transformed the Grand Palais into a crumbled post-apocalyptic scene you traditionally wouldn’t associate with couture. The runway curtains parted under a dusty proscenium arch, displaying a jagged skyline of post-modern architecture complete with glass skyscrapers under which sparkled a procession of sequin encrusted clothes.

Fall/Winter 2014
For FW14, Lagerfeld transformed the Grand Palais into a fully-functioning supermarket, complete with fresh produce and shopping baskets that later went on to retail for $12,500. Everything was meticulously emblazoned with double-C-logos and the set even boasted of a hardware section fully stocked with Chanel brooms and hammers. Naturally, the fashion show attendees proceeded to loot the Chanel supermarket after the show finished.

Spring/Summer 2015
This was the year that Chanel flirted with activism and conducted a feminist protest inside the Grand Palais. Lagerfeld transformed the space into a Parisian boulevard, complete with a staged protest of models wielding sign boards. Led by a megaphone-toting Cara Delevingne and Gisele Bündchen, the models marched down the catwalk together carrying placards that screamed slogans such as “Ladies First,” “Women’s Rights Are More Than Alright” and “History Is Her Story.”

Spring/Summer 2016
This season, Lagerfeld took flight with Chanel Airlines and transformed the Grand Palais into a airport terminal, complete with Chanel-branded paraphernalia like check-in kiosks, ticketing agent and branded luggage carts. Show attendees sat on boarding gate seats while they watched models walk and check-in for their flights.

Fendi Great Wall of China Show (2007)
Though this is not a strictly Chanel show, Karl Lagerfeld is the mastermind behind this legendarydisplay of excellence. Lagerfeld held a fashion show on the iconic 2,000-year-old world heritage site- the Great Wall of China. The entire show cost an excess of $10m to produce and took over a year to plan, and despite being dogged by delays from Chinese officials, Fendi was eventually granted a permit to show.
After the last model made her lap on the set, Lagerfeld switched on the strobe lights to reveal gigantic double-F Fendi logos being projected onto the mountains.